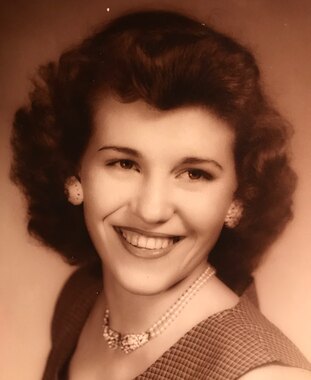 Back to JoAnn's story

JoAnn Lynch Soules passed into the eternal love of God Friday, Feb. 7, 2020, at the age of 84.
Services will be held at Peters Funeral Home on Tuesday, Feb. 11, 2020 at 11 a.m., with Pastor Larry Allgood officiating. Private interment will follow on a later date in Shady Grove Cemetery. Visitation will be one hour before the service.
Born in Greenville, Texas on Feb. 24, 1935 to Tom Lynch and Grace McFarland Lynch, Joann was a proud cheerleader and graduate of Caddo Mills High School.
JoAnn was a faithful child of God and devoted her life to sharing the same love she received from those who lives she crossed paths with. She was a Baptist.
She worked at Haggar Slacks for many years before becoming a full-time homemaker. She loved her family and never met a stranger. Joann enjoyed talking and meeting new people, cooking, shopping and dining out.
JoAnn was preceded in death by her mother, Grace McFarland Lynch; father Tom Lynch; husband Robert Soules; and two brothers, Kenneth Lynch and Glen Lynch.
She leaves to cherish her memory: two sons Steve Combs and wife Sandra of Greenville, Texas, and Allen Pope and wife Emily of Plano, Texas; daughter Sue Bond and husband Jackie of Plano, Texas; eight grandchildren, Michael Combs, Chris Combs, Anthony Combs, Corey Bond, Madison Pope, LaRonica McCurdy, Courtney Jackson, Victor Jackson; 11 great-grandchildren; and one great-great grandchild.
She will be truly missed by all who knew her.
Published on February 10, 2020
To send flowers to the family of JoAnn Lynch Soules, please visit Tribute Store.

Send flowers
in memory of JoAnn

A place to share condolences and memories.
The guestbook expires on May 10, 2020.