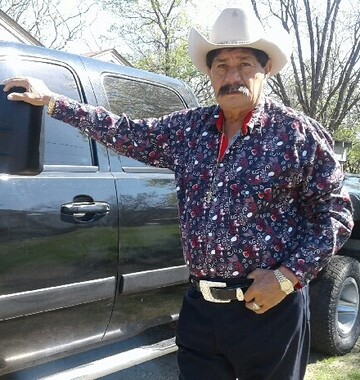 Back to Benito's story

Benito Salazar Herrera, 61 of Greenville, TX passed away on Dec. 10, 2019. He was born on March 21, 1958 to Inocencio and Maria Herrera in Mexico. Benito loved his family, ranching, and working with his cows. He retired from the City of Greenville Water Department.
Benito is survived by his loving wife, Ray Robles Herrera; mother, Felipa Herrera; brothers, Inocencio Herrera and Martin Herrera; sisters, MA. Guadalupe DeLeon and Santis Reyes; step brothers, Eduardo and Felipe Benavidez; step-sons, Joe Melendez and Jesse Melendez; step daughter, Felicia Melendez; grandchildren, Raven Melendez-Key, Michael Melendez; great grandchild, Genesis Pitman. Along with several nieces and nephews and extended family and friends.
Benito is preceded in death by his father, Inocencio Herrera and step- son, Frankie Melendez, Jr. on April 1, 2019.
A visitation will be held on Thursday, Dec. 12, 2019 from 6-8 p.m. at Lynch Funeral Service in Greenville, TX. A funeral mass will be held on Friday, Dec. 13, 2019 at 10 a.m. at St. Williams Catholic Church in Greenville, TX.
Published on December 11, 2019
To plant a tree in memory of Benito Salazar Herrera, please visit Tribute Store.

Plant a tree in memory
of Benito